RA symptoms have a gradual onset in most cases. Patients notice a slow development of signs and symptoms over a period of weeks to months. The disease has an intermittent course wherein there are phases of flare-ups (when the disease activity increases) and remission phases (when the disease remains silent), making the diagnosis and treatment difficult. Again the non-specific symptoms or certain atypical presentations may further add to the problem in diagnosing this condition.

Signs and symptoms of joint affection in RA: 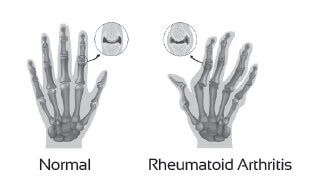 On account of the symptoms described above, simple tasks of daily living may also become difficult for RA patients. Turning door knobs, working in the kitchen, opening jars, combing hair, dressing themselves, etc., can also become quite difficult during the phase of relapse. Not being able to perform daily tasks with ease may become a cause of depression, anxiety and helplessness for these patients.

Non-articular symptoms (other than those related to joints) of RA include the following: