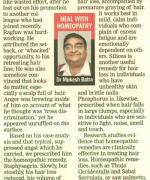 Thirty-year-old Raghav was having a bad time. He could not understand whether his hair loss or receding hair line was the cause or effect of his career problems. He felt that a good, commitment-driven three years at the company, where he worked, seemed like wasted effort, after he lost out on his promotion to another colleague who had joined recently. Raghav was hard-working. He attributed the setback, or “whacked” opportunity, to his retreating hair line. He was also somehow convinced that looks do matter, especially a scalp full of hair. Anger was brewing inside of him on account of what he thought was “tress discrimination,” yet he appeared unruffled on the surface.

Based on his case-analysis and that typical, suppressed angst which he carried, we prescribed him the homeopathic remedy, Staphysagria. Slowly, but steadily, his hair loss reduced, his volume of hair improved, and his receding hair line controlled. He also regained his self-confidence. He now feels, no matter what, it is only diligent work that recompenses. Today, he works in a much larger organisation, contributing his best to its and his own career growth.

Homeopathy does not merely treat hair loss on the surface. It aims to treat the “root cause” of the problem, taking into consideration the individual’s unique nature, temperament, personality and so on. It offers customised, or tailor-made, solutions for each individual, because each of us is as distinct as our fingerprint. The homeopathic remedy, Acid Phosphoricum, for instance, is effective in hair loss, accompanied by premature graying of hair. It works best in mild, calm individuals who complain of excess fatigue and are emotionally dependent on others. Silicea is another useful remedy for hair loss in individuals who have unhealthy skin and brittle nails. Phosphorus is, likewise, prescribed when hair falls in large clumps, especially in individuals who are sensitive to light, noise, smell and touch.

Research studies evidence that homeopathic remedies are clinically effective in treating hair loss. Homeopathic remedies, such as Thuja Occidentalis and Sabal Serrulata, or saw palmetto, for example, act as natural hormone inhibitors, since hormonal problems can cause hair loss. They, therefore, help to stop and control hair loss — naturally.