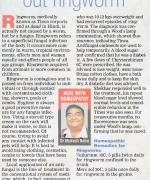 Ringworm, medically known as Tinea corporis and as â€˜Daad' in Hindi, is actually not caused by a worm, but by a fungus. Ringworm refers to a superficial fungal infection of the body. It occurs more commonly in warm, tropical environments, affects men and women equally, affecting people of all age groups. Ringworm acquired from animals is more common in children.

Ringworm is contagious and is passed on from individual to individual or through contact with contaminated clothing, showers, pools or combs. Hygiene is always a good preventive measure for any fungus infection. Using a steroid type cream on the rash will make it worse; so, this is not recommended. Of course, trying to avoid any contact with infected pets will help. It is best to avoid using clothing, cosmetics, combs or towels that have been used by someone else.

Local application of an antifungal is the line of treatment in the conventional system of medicine, which, in fact, suppresses it only to manifest later in a more severe form. Individuals who suspect that they or their pets are infected with ringworm are advised to seek appropriate medical attention.

Underlying factors such as diabetes and obesity must be considered when treating Tinea. I remember the case of 47-year-old Shekhar, who was 10-12 kg overweight and had recurrent episodes of ringworm. The diagnosis was confirmed through a Wood's lamp examination, which showed fluorescence, indicating Tinea. Antifungal ointments are used to help temporarily. A blood sugar test confirmed that he was a diabetic. A few doses of Chrysarobinum 6C were prescribed. He was advised to lose weight, wear loose-fitting cotton clothes, have bath twice daily and to keep the skin dry. A diabetic diet was advised. Shekhar responded well to the treatment, his repeat blood sugar level showed normal levels and considerable reduction in the Tinea was also seen. For consecutive months, no fluorescence was seen under Wood's lamp, confirming that he was cured.

Merc sol 30C, 5 pills once daily for ringworm in the groins.