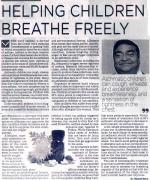 THE word 'asthma' is derived from the Greek word meaning 'breathlessness or panting' both of which accurately describe an attack of asthma. Asthma is the most common cause of school absenteeism due to chronic disease and accounts for an estimated 14 million lost school days. Asthma in children is the cause of almost three mil-lion physician visits and 200,000 hospitalizations each year.

Asthmatic children can cough, wheeze, and experience breathlessness and a sensation of tightness in the chest. Many parents are ignorant of the fact that children don't have to necessarily wheeze to have asthma - the only symptom may be a frequent, annoying cough, particularly at night or during exercise. Children with reactive airway disease, recurrent bronchitis, or bronchitis with wheezing probably have asthma.

Unfortunately, asthma is not diagnosed properly and is under-treated. It is usually caused by hereditary factors are often known to alternate with each other. Conventional medicines for respiratory allergies can aggravate the skin condition whilst ointments and lotions tend to suppress the skin condition and can trigger asthma.

Allergies, especially respiratory or skin allergies are some of the conditions for which homoeopathic treatment is most frequently sought.

Being holistic in its approach. Homoeopathy treats asthma by taking into account both physical as well as psychological factors. Homoeopathic treatment is customized individualistically, the medicines varying on the basis of the allergens, specific time and positional modalities, and environmental factors. Allergens from house dust mites, pollen, moulds, and pets are the most common causes. Although asthma is not a psychological condition, intense laughing, crying, anger or fear can all trigger symptoms in an asthmatic child.

Respiratory infections, including the flu, frequently trigger severe episodes of asthma. Research indicates that vi-ruses, rather than bacteria most frequently produce these infections. Antibiotics are of no benefit for viral infections and thus may be of little value in an asthmatic episode.

Exposure to second hand tobacco smoke is also an important and widely accepted contributor to childhood asthma. Children of parents who smoke are 28% more prone to respiratory conditions like bronchitis and pneumonia as compared to children of non-smokers.

Most children who suffer from respiratory allergies are also known to suffer from skin allergies like eczema. They relation to food; e.g. asthma triggered by eating apples calls for Antim tart; whereas, that caused by fatty food will need Pulsatilla. Asthma caused by dust exposure may respond to Pothos. While Psorinum helps cases of asthma that are better by lying down, Kali carb treats those that get aggravated by the same.

An apt example to demonstrate the analytical approach of Homoeopathy is the case of a child whose asthmatic at-tacks coincided with his father's official overseas trips. Realising that separation anxiety was triggering the child's asthma, we prescribed the homoeopathic medicine Mag Carb, a homoeopathic remedy that is excel-lent in reducing the forsaken feeling, that some patients experience. Within a few weeks of treatment, this child's asthmatic attacks began to decrease in both intensity as well as frequency.

A few simple precautions can also go a long way in preventing asthmatic at-tacks. An early dinner is recommended. An asthmatic should not sleep immediately after eating as this could trigger an attack. It is best to avoid getting exposed to allergens such as dust, strong odours, fUmes, animal dander, pollens, and other aggravating factors. Respiratory infections should be treated at their onset it-self so that they don't progress and give rise to breathlessness.

The aim of homoeopathic treatment is not just to prevent asthmatic attacks. It also tries to increase the breathing capacity of the patient so that with bet-ter oxygenation of the lungs, the pa-tient's overall health also improves.