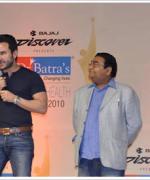 These awards, now in their fifth year, are IndiaÃ¢â‚¬â„¢s first health honours instituted by Dr Batra'sÃ¢â€žÂ¢, to recognise those who have displayed outstanding courage in the fight against disease and disability. Pioneers in the Indian automobile industry, Bajaj Discover has partnered for the very first time with this yearÃ¢â‚¬â„¢s project which for the first time is being held in New Delhi.

In addition to a short biographic film on each awardee, the guests were entertained by scintillating performances by dance guru Shiamak DavarÃ¢â‚¬â„¢s troupe of specially-challenged children. There was also a musical rendition by the students of The Happy Home and School for the Blind. Speaking on the occasion, Dr. Mukesh Batra, Founder and CMD, Dr Batra'sÃ¢â€žÂ¢ Positive Health Clinic Pvt. Ltd. said, "These awards are but a small reward for a big achievement. In overcoming serious health setbacks to lead positive, purposeful lives, each one of our Positive Health Heroes has demonstrated that the strength of the human spirit can conquer the frailties of the human body. The Positive Health Awards honour this spirit and re-affirm Dr Batra'sÃ¢â€žÂ¢ commitment to health, strength and positivity.Ã¢â‚¬Â

o Tamana Chona Ã¢â‚¬â€œ Tamana is a cerebral palsy afflicted, she is associated with Tamana, a NGO her mother incepted to help specially-challenged individuals and also teaches at a public school in Delhi
o Preeti Monga Ã¢â‚¬â€œ Preeti is visually challenged. She has her own human resource consultancy working for the employment of the disabled.
o Poonam Bagai Ã¢â‚¬â€œ Poonam is a cancer survivor and after giving up her job with the railways she now runs a NGO named CanKids to provide support to children suffering from cancer.
o Major General S K Razdan Ã¢â‚¬â€œ Major Razdan is first wheelchair bound army officer to be promoted to the post of Major General.
o Rajinder Johar - A quadruplegic after being shot at in a mishap, Mr Johar runs the Family of Disabled an NGO for the disabled.

About The Positive Health Awards:

Dr Batra'sÃ¢â€žÂ¢ Positive Health Clinics, the worldÃ¢â‚¬â„¢s leading chain of homeopathy clinics, instituted the Positive Health Awards 5 years ago in 2006. These awards salute the heroism of those who have fought serious physical setbacks to survive and contribute meaningfully to society. We also honour those medical professionals who selflessly serve society. These awards encourage others to believe in themselves and show to the world that nothing is impossible.

Corporate Social Responsibility:
Dr Batra'sÃ¢â€žÂ¢ Positive Health Foundation has been making a profound difference to the lives of orphans, handicapped children and the elderly. On the first Monday of each month, one clinic in each of the cities where Dr Batra'sÃ¢â€žÂ¢ is located, offers free consultation and medication to needy patients. Every employee at Dr Batra'sÃ¢â€žÂ¢ contributes 1% of his/her salary to the Foundation every month. 1% of the organization's net profit also goes to the same. The Foundation grants scholarships to deserving students who wish to pursue studies in homeopathy. It conducts CSR activities in a number of institutions such as the Happy Home & School For The Blind, Shepherd Widow's Home, Mercy Old Age Home, Action India and People For Animals shelter, to just name a few. Every year, it honours individuals who are living medical miracles having survived and recovered from seemingly irrecoverable conditions to lead remarkable lives.