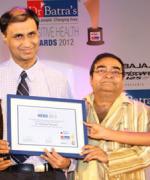 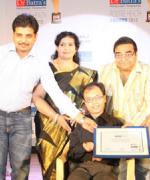 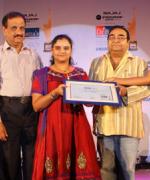 Bajaj Discover presents Dr Batra'sÃ¢â€žÂ¢ Positive Health Awards 2012, an initiative to recognise and award the heroism of those who have displayed outstanding courage in the fight against disease and disability, were held at Chowdiah Memorial Hall, Bengaluru today. South Indian Actress Sanjjanaa presented the awards to the winners at a glittering ceremony that had over 600 people in attendance. It marked the 7th year of this initiative. Rajiv Bajaj was among some of the other dignitaries present at the event.

In addition to a short biographic film on each awardee, attendees at the award function were treated to scintillating performances by dance guru Shiamak DavarÃ¢â‚¬â„¢s Ã¢â‚¬ËœVictory Arts FoundationÃ¢â‚¬â„¢ troupe of specially-abled children.

Speaking on the occasion, Dr. Mukesh Batra, Padma Shri recipient said: Ã¢â‚¬Å“The Dr Batra'sÃ¢â€žÂ¢ Positive Health Awards salutes people with unyielding grit and unflinching determination, who have beaten the odds to overcome seemingly irrecoverable conditions and give back something commendable to society in their own way. The heroes selected this year have demonstrated that very strength of the human spirit. The Positive Health Awards honor this spirit and re-affirm Dr BatraÃ¢â‚¬â„¢s commitment to health and positivity.Ã¢â‚¬Â

Reiterating his support to the cause, Mr. Rajiv Bajaj said: Ã¢â‚¬Å“The stories of these awardees will undoubtedly inspire and spread hope to others in the country. Having been associated with this initiative and witnessing the remarkable stories of strength and recovery of the awardees, I am honoured to be a part of this yearÃ¢â‚¬â„¢s ceremony."

Boniface Prabhu- Boniface Prabhu is one of the pioneers of wheelchair tennis in India and a guiding force for many wheelchair tennis players. He was born as a normal child, but a wrong lumbar puncture at a clinic left him partially disabled at the age of four. Boniface is ranked India's number one wheelchair tennis player, second in Asia and World number 24. He represented India 64 times till date in 6 disciplines Ã¢â‚¬â€œ Discus Throw, Javelin, Shot Putt, Badminton, Table Tennis and Wheelchair Tennis. He is the first Indian Wheelchair Tennis player to have played at the prestigious US Open, British Open, French Open & Australian Open Grand Slams. He is the 1996 World Wheelchair Games champion with two gold medals & one silver medal.

Dr. Rajdeep Manwani - Dr. Rajdeep lost his eyesight at the age of 14 due to macular degeneration. Dr. Rajdeep Manwani also known as the "Management Guru", is an academician, trainer, quizmaster par excellence and a great motivator. He is the world champion of international speech contest and is an active member of Bangalore Toastmasters club. He is a triple post graduate having completed his M.Com, MBA, M.Phil (with gold medal for topping the M.Com and M.Phil examinations) and also a Doctorate in Commerce on the topic Strategic Evaluation of Training in Commercial Banks. He has trained, motivated and mentored over 14,500 students and executives over a span of sixteen years and received excellent ratings from his corporate and public sector clients such as Nokia Siemens, TCS, SBI, Britania, Sobha Developers, ATNT India, etc.

Mr. Ashwin Karthik Ã¢â‚¬â€œ Ashwin Karthik S.N is the first B.E. Graduate in India who has a condition of Cerebral Palsy Ã¢â‚¬â€œ Quadriplegic, the severest form that affects all four limbs. Ashwin Karthik enjoys the distinction of securing the highest percentage ever scored by a student with cerebral palsy and receiving the National Scholarship for engineering studies, which is given to only one physically disabled student across India. B.E. in Computer Science, Ashwin is presently working with MphasiS, an HP company, as Delivery Software Engineer. Ashwin has received several awards some of them being The Helen Keller Award 2011 by National Centre for Promotion of Employment for Disabled People (NCPEDP) and Shell and the Youth Excellence Award titled Ã¢â‚¬ËœDetermination Icon of the YearÃ¢â‚¬â„¢ by Yuva Bangalore.

TJ Nivedita Ã¢â‚¬â€œ Nivedita had severe brain damage due to a jaundice attack in her infancy. She had to undergo a surgery, which led to the loss of hearing and speech and left side spastic; retardation added to the agony. Her latent talent and inclination towards Bharatanatyam started kindling at a very tender age of 6. She used to enact dance by watching others doing it. Despite multiple disabilities she has mastered the skill with perfection and harmony, earning several accolades over the years. Nivedita made her debut stage performance when she was 8 years old. Since then, she has taken part in over 30 stage performances. Several leading artists have praised her about her performance.

Founded by Dr Mukesh Batra in 1982, Dr BatraÃ¢â‚¬â„¢sÃ¢â€žÂ¢ Positive Health Clinic Pvt. Ltd (DBPHCPL) is IndiaÃ¢â‚¬â„¢s Leading Homeopathic Healthcare Corporate. Dr. Mukesh Batra set up a single clinic in Mumbai in 1982, which today has grown into a corporate chain of more than 97 homeopathic clinics across 39 cities in India and abroad. The Company has more than 275 doctors, including 40 MDs, Merit Holders, Gold Medallists, and Specialists in Trichology, Dermatology, General Medicine, Cardiology, Diabetology, and Paediatrics, who are hand-picked and personally trained by Dr. Batra.

Dr BatraÃ¢â‚¬â„¢sÃ¢â€žÂ¢ has provided individualized treatment and care to over 6 lakh patients across the globe, including 2.5 lakh hair patients, and 1 lakh skin patients. The areas of treatment at Dr BatraÃ¢â‚¬â„¢sÃ¢â€žÂ¢ clinic cover chronic diseases like hair loss, alopecia areata, acne, psoriasis, eczema, white patches, other skin conditions, asthma, allergies, spondylosis, arthritis, irritable bowel syndrome and other lifestyle and stress-related disorders. DBPHCPLÃ¢â‚¬â„¢s Cyber Clinic (www.drbatras.com) has been listed in the Limca Book of Records (Editions 2004 and 2005) for being the first Cyber Clinic to offer Online Consultation to more than 4.5 lakh patients every year from more than 87 countries around the world.

Dr BatraÃ¢â‚¬â„¢sÃ¢â€žÂ¢ Positive Health Foundation has been making a profound difference to the lives of orphans, handicapped children and the elderly. On the first Tuesday of each month, one clinic in each of the cities where Dr BatraÃ¢â‚¬â„¢sÃ¢â€žÂ¢ is located, offers free consultation and medication to needy patients. Every employee at Dr BatraÃ¢â‚¬â„¢sÃ¢â€žÂ¢ contributes 1% of his/her salary to the Foundation every month. One percent of the organisationÃ¢â‚¬â„¢s net profit also goes to the same. The Foundation grants scholarships to deserving students who wish to pursue studies in Homeopathy. It conducts CSR activities in a number of institutions such as the Happy Home & School For The Blind, Mumbai, Shepherd WidowÃ¢â‚¬â„¢s Home, Mumbai, Little Sisters of the Poor, Bengaluru, Mercy Old Age Home, Chennai, Anurag Services (Old Age Home), Hyderabad, Sandhya Home, Pune and People For Animals, New Delhi, to name a few. Every year, it honours individuals who are living medical miracles, having survived and recovered from seemingly irrecoverable conditions to lead remarkable lives.

Dr BatraÃ¢â‚¬â„¢sÃ¢â€žÂ¢ Positive Health Clinics, the worldÃ¢â‚¬â„¢s leading chain of homeopathy clinics, instituted the Positive Health Awards 6 years ago in 2006. These awards salute the heroism of those who have fought serious physical setbacks to survive and contribute meaningfully to society. We also honour those medical professionals who selflessly serve society. These awards encourage others to believe in themselves and show to the world that nothing is impossible.