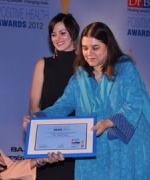 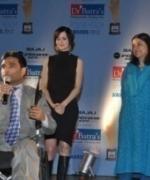 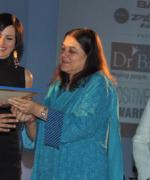 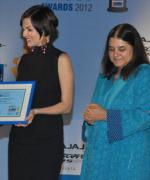 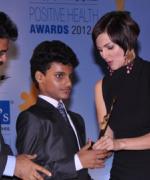 Bajaj Discover presents Dr Batra'sÃ¢â€žÂ¢ Positive Health Awards 2012, an initiative to recognise and award the heroism of those who have displayed outstanding courage in the fight against disease and disability, were held at Kamani Auditorium, Delhi today. Yana Gupta presented the awards to the winners at a glittering ceremony that had over 600 people in attendance. It marked the 7th year of this initiative. Rajiv Bajaj and Maneka Gandhi were the other dignitaries present at the event.

In addition to a short biographic film on each awardee, attendees at the award function were treated to scintillating performances by dance guru Shiamak DavarÃ¢â‚¬â„¢s Ã¢â‚¬ËœVictory Arts FoundationÃ¢â‚¬â„¢ troupe of specially-abled children.

Speaking on the occasion, Dr. Mukesh Batra, Padma Shri recipient said: Ã¢â‚¬Å“The Dr Batra'sÃ¢â€žÂ¢ Positive Health Awards salutes people with unyielding grit and unflinching determination, who have beaten the odds to overcome seemingly irrecoverable conditions and give back something commendable to society in their own way. The heroes selected this year have demonstrated that very strength of the human spirit. The Positive Health Awards honor this spirit and re-affirm Dr Batra'sÃ¢â€žÂ¢ commitment to health and positivity.Ã¢â‚¬Â

Reiterating his support to the cause, Mr. Rajiv Bajaj said: Ã¢â‚¬Å“The stories of these awardees will undoubtedly inspire and spread hope to others in the country. Having been associated with this initiative and witnessing the remarkable stories of strength and recovery of the awardees, I have seen this event grow phenomenally.Ã¢â‚¬Â

Deepa Malik - Life took a twist for Deepa Malik when a spinal tumor made walking impossible, 12 years ago. Deepa is a wife of a retired Cavalier Col, mother of two adult daughters, an international sports person and first sportswoman to represent the country at international level in her category of disability. She is the first Indian in the category to receive the Arjuna Award by the President of India in April 2012. She has won 39 Gold, 4 Silver, 2 Bronze medals in various games such as javelin, discuss, shot-put and swimming.

Javed Ahmad Tak - Javed Ahmad Tak was a victim of the armed conflict in Kashmir in March 1996. He was hit by a bullet fired from a one meter range injuring his spinal cord, liver, kidney, pancreas, spleen and intestine. Since then, as a paraplegic, he has been bound to a wheelchair. He is a social activist and the Founder and Chairman of Humanity Welfare Organisation Helpline Ã¢â‚¬â€œ an NGO in Jammu & Kashmir. His NGO provides free computer education to poor orphans, physically challenged, and other students belonging to under privileged class. His struggle has changed the lives of the disabled community in Jammu and Kashmir.

Ajit Kumar Yadav - At the age of 5, Ajit Kumar lost vision in both his eyes due to acute diarrhoea. But that did not stop him from living his dream of becoming an IAS officer, the second in the country with total loss of vision to get into IAS. He was the only blind student in his school and he topped in Class IX and X examinations. Ajit graduated in B.A. Political Science (Hons) with flying colours. He also cleared B. Ed. and took up a teaching job in a Delhi college. Even after securing a rank of 208 among 791 successful candidates in the Civil Services examination in 2009, Ajit was denied an IAS appointment due to his blindness and awarded IRPS, a service way below his rankings. He fought a three-year legal struggle to get his rightful place.

Benzy Kumar - When Benzy was 9 years old she was diagnosed with cerebral palsy. Her parents took her to Spastics Society of Mumbai for stimulation therapy, which consists of exercises and muscle toning. It helped make her body less stiff. She responded only to musical toys and remembered the sequence of songs on the Channel V countdown. So they decided to try music therapy. Being able to communicate through music made a big difference to Benzy. At the age of seven she gave her first public recital. As she turned 10, Benzy enchanted melody queens like Lata Mangeshkar, Anuradha Paudwal and several others by her superb singing. Benzy was awarded the National Child Award for Exceptional Achievement, by President APJ Abdul Kalam in 2004, at Vigyan Bhawan, Delhi.

Manav Shukla - Manav is non-verbal and autistic child. He needs assistance to maintain self care and to perform daily activities. He was not accepted in normal mainstream education due to his PDD and autistic features. Through various medical interventions and intensive therapies for 11 years Manav could get admission in Kothari International School, Noida in Jan 2012. This is one of his great achievements in his academics. Manav is smart and good looking. He has faced camera from his childhood. He has done Photo shoot for Sahara Magazine, Noida in September 2011. He shot his first documentary film Ã¢â‚¬Å“Yeh HauslaÃ¢â‚¬Â which was directed by Ms. Deepa Mehta. This documentary was aired on Zee T.V. in May 2012.

Founded by Dr. Mukesh Batra in 1982, Dr Batra'sÃ¢â€žÂ¢ Positive Health Clinic Pvt. Ltd (DBPHCPL) is IndiaÃ¢â‚¬â„¢s Leading Homeopathic Healthcare Corporate. Dr. Mukesh Batra set up a single clinic in Mumbai in 1982, which today has grown into a corporate chain of more than 97 homeopathic clinics across 39 cities in India and abroad. The Company has more than 275 doctors, including 40 MDs, Merit Holders, Gold Medallists, and Specialists in Trichology, Dermatology, General Medicine, Cardiology, Diabetology, and Paediatrics, who are hand-picked and personally trained by Dr. Batra.

Dr Batra'sÃ¢â€žÂ¢ has provided individualized treatment and care to over 6 lakh patients across the globe, including 2.5 lakh hair patients, and 1 lakh skin patients. The areas of treatment at Dr Batra'sÃ¢â€žÂ¢ clinic cover chronic diseases like hair loss, alopecia areata, acne, psoriasis, eczema, white patches, other skin conditions, asthma, allergies, spondylosis, arthritis, irritable bowel syndrome and other lifestyle and stress-related disorders. DBPHCPLÃ¢â‚¬â„¢s Cyber Clinic (www.drbatras.com) has been listed in the Limca Book of Records (Editions 2004 and 2005) for being the first Cyber Clinic to offer Online Consultation to more than 4.5 lakh patients every year from more than 87 countries around the world.

Dr Batra'sÃ¢â€žÂ¢ Positive Health Foundation has been making a profound difference to the lives of orphans, handicapped children and the elderly. On the first Tuesday of each month, one clinic in each of the cities where Dr Batra'sÃ¢â€žÂ¢ is located, offers free consultation and medication to needy patients. Every employee at Dr Batra'sÃ¢â€žÂ¢ contributes 1% of his/her salary to the Foundation every month. One percent of the organisationÃ¢â‚¬â„¢s net profit also goes to the same. The Foundation grants scholarships to deserving students who wish to pursue studies in homeopathy. It conducts CSR activities in a number of institutions such as the Happy Home & School For The Blind, Mumbai, Shepherd WidowÃ¢â‚¬â„¢s Home, Mumbai, Little Sisters of the Poor, Bengaluru, Mercy Old Age Home, Chennai, Anurag Services (Old Age Home), Hyderabad, Sandhya Home, Pune and People For Animals, New Delhi, to name a few. Every year, it honours individuals who are living medical miracles, having survived and recovered from seemingly irrecoverable conditions to lead remarkable lives.

Dr Batra'sÃ¢â€žÂ¢ Positive Health Clinics, the worldÃ¢â‚¬â„¢s leading chain of homeopathy clinics, instituted the Positive Health Awards 6 years ago in 2006. These awards salute the heroism of those who have fought serious physical setbacks to survive and contribute meaningfully to society. We also honour those medical professionals who selflessly serve society. These awards encourage others to believe in themselves and show to the world that nothing is impossible.