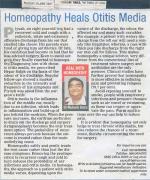 Piyush, an 8-year-old, had recurrent cold and cough with a yellowish white and extremely offensive discharge from his ear that smelled like cheese. His parents were tired of giving him antibiotics. Of late, his condition had become so bad that he was advised surgery. Keen to avoid surgery, they finally resorted to Homoeopathy. Diagnosing him with chronic otitis media, we prescribed Hepar Sulph on the basis of the odor of his discharge. Regular follow-ups showed a marked reduction in the intensity and frequency of his symptoms and Piyush was saved from the Surgeon's knife.

Otitis media is the inflammation of the middle ear, mostly due to an infection, which leads to inflammation and buildup of pus behind the eardrum. When the pressure increases, the eardrum perforates to drain out the discharge and surgery (tympanoplasty) becomes the only treatment option. The probability of recurrence always persists because the outcome is treated rather than the main underlying cause.

Homoeopathy safely and gently treats the root cause rather than just the disease symptoms. Removing the predisposition to recurrent cough and cold in turn reduces the probability of ear infections and otitis media. In Homoeopathy, the approach to a patient with otitis media varies, depending upon the nature of the discharge, the odor, the affected ear and many such variables. For example, a patient with watery discharge from the left ear will need a remedy like Graphites; whereas, a case with thick pus like discharge from the right ear may call for Silicea. This makes Homoeopathy a unique science, very different from the conventional line of treatment where surgery and antibiotics are the only avenues. Clinical studies have further proved that Homeopathy is more effective in reducing pain and preventing relapses (70.7%).

Avoid exposing yourself to smoke, people with respiratory infections and pressure changes such as air travel or swimming, as these can trigger or aggravate the pain. Warm applications over the ear can help to reduce pain.

It is evident that Homeopathy not only helps to treat chronic otitis media, but also reduces the chances of a recurrence, thereby circumventing the need for surgery.